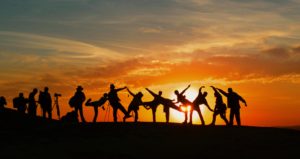 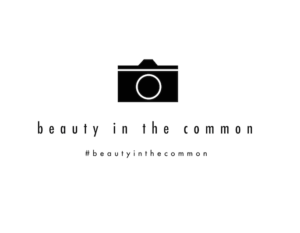 Our February mid-month podcast guest is Ian Simkins of the Beauty In The Common project. Ian currently serves as pastor at Community Christian Church in Naperville, Ill. He has spoken across the United States and around the world, toured the United States with a harpist, taught at two universities, worked with several justice ministries, played drums on two albums, intentionally lived on the streets of Philadelphia for a week, and been a guest on numerous radio shows. Ian founded the Beauty In The Common project in 2015. It has grown from a small local group of friends to a web community of over 22,000 people.

The following article only contains a snippet of our conversation, listen to the podcast below to hear much more and subscribe on iTunes, GooglePlay, Stitcher, and/or YouTube. –J.J.

Janae: Let’s start by talking by about Beauty In The Common. How did you come up with the idea? What are the different parts?

Ian: For a couple of years, we were hosting these songwriter gatherings at my house… So we thought why don’t we utilize that space and create an opportunity for different creatives from around the area to share… spoken word, songs, fine art or poetry. We would come up with different themes for each night… I was really interested in this idea of the beauty of things that are so easily overlooked and our obsession with “mountain top” experiences. What happens in all that “valley” time that we live in 99 percent of the time? So I shared, “I’m interested in exploring the idea of Beauty in the Common.” One of my buddies at the table asked, “Did you just come up with that? Whose phrase is that?” I was like… “I think its mine.” Another buddy had his phone out, and he said, “The domain’s available; you should buy the website!” I was like, “Whoa… hold on… [laughs] I was just processing out loud this idea that I’ve been reading about a bit.”

That next week my alma mater, Judson University in Elgin, Ill., invited me to come out and speak for a weeklong series of chapels. They asked, “Do you have any themes? We’re open to themes this year.” I shared with them an expanded version of this Beauty in the Common idea…. To their credit, they were like, “We love it! We’d love to help support you in that. Let’s do it.” I proposed to them… “How about instead of me teaching for 30, 35 minutes, what if I just teach for ten and then have songwriters, poets, painters and dancers? Let’s create a different kind of experience.” At first, they were like, “No, we’d rather just have you teach.” But, the more we talked about it, the more open to the idea they became. What we did was… because it was five chapels… we framed it in a binary structure. Each day, I would tackle two sides of the same coin. So, the first day was beauty in community and beauty in solitude. Then the next day was beauty in chaos and beauty in stillness. I invited friends from the area that I knew to write original songs based on those themes. I assigned them each a different theme, and they created these incredible songs.

So, we had this five-day experience, and we had these ten songs. When we were done it was done in my mind. All of these artists were like, “So what’s next? What are we doing now?” That was kind of “it” for me. I didn’t really think past this. Jeremiah, one of the songwriters, actually ran a studio in Naperville, so we said, “Let’s capture these songs.” A bunch of the Judson students had been studying film, and they said, “We can film these songs too! We can create a whole collection of these things.” I was like, “Okay, sure.” So we booked a day at the studio, A Place In The Trees in Naperville with Jeremiah and Matt… That’s when we dreamt up this project called The Common Year.

So what The Common Year is like is the earliest church gatherings and what those times actually looked like. This one scholar was talking about the components that were present in every one of those gatherings: word, time, music, meal and prayer. And so, we developed a yearlong experience based on those five. At the beginning of each month, we release a song with a particular theme. Then each week we released a different narrative written by friends or family based on the structure of five. We had Catholic, Protestant and Agnostic writers on this project. A couple of years later, it’s become this really eclectic collection of thinkers, writers, artists and poets. It’s been really wild; it’s become a whole lot more than any of us ever thought it would be.

JJ: What I really think is interesting is that it’s a return to the liturgical year, or even before the Church, the Wheel of the Year. It’s the idea that we see our lives as moving through time, and I think that is something that is really missing. You miss so much of the beauty in life when you don’t stop and say. “This is life. This is now. This is life happening right now.”

IS: Right. A lot of the idea for beauty specifically came from the Catholic Church actually. Historically, they have the transcendentals that were drawn a lot from Plato’s writings. These transcendentals… were truth, goodness and beauty…

Beauty has a way of drawing out of us or moving us in a way that simply arguing doctrinal or political views just simply can’t. That’s kind of the lifeblood of the whole thing, which is why we’ve been able to have different writers from different backgrounds. It’s not about furthering some brand; it’s not owned by some church or denomination. It’s all about what our lives would be like if we were actually intentional about being captivated, about finding wonder and awe, in the “everyday-ness” of our lives.

The thing about the word “common” is that it simply doesn’t mean ordinary. It means being centered; finding more common ground with the people we interact with; starting first with what unites us. What do we have that’s similar? What if we started there and offer people opportunities to actually experience wonder and awe in the “everyday-ness” of their lives? We’ve found that to be really, really powerful, more so than we thought it would be.

Spencer: I think that anyone who is expending effort to derail the effort to find common ground is really dangerous. I don’t think I’m overstating that; it’s a danger to humanity.

IS: That’s justifiably scary. One of the things Brené Brown says that I really appreciate is… “People are hard to hate up close; so lean in.” For me, I’m not naïve enough to think we just need to create a space for people to come, and they’ll heal. Some people just want to see the world burn… I’ve also seen people radically transformed when they experience the “no-strings-attached” type love of a community. They actually feel that they are known, seen and heard and that can change a life.

JJ: What are you doing this year for Lent this year with Beauty In The Common? 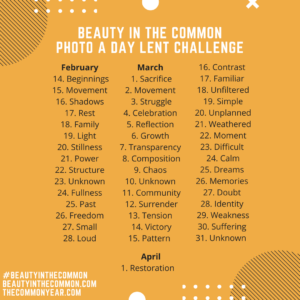 IS: What we have done for Lent … that people really resonate with is create a daily challenge to see or express a particular word that day. Sometimes that means sharing it on social media with #beautyinthecommon. Others don’t share any of it online, but they do with their family. We offer a daily focus – something to be mindful of that day. What we’ve found is a lot of mindfulness focuses solely on things that you would probably put in the category of positive, but I think that’s only half the story. Part of being fully alive and in the world isn’t that the highs are higher, but we also really, truly center into times of grief as well. We don’t do that very well as a culture… So if we can be mindful of that which is beautiful, kind or joyful in the world, but be mindful of sorrow, grief, sadness, or pain. So, we usually create some challenge for the season of Lent… It’s come a really cool part of the calendar.

Connect with the Beauty In the Common project on Facebook, Twitter and Instagram. Join the Beauty in the Common 40-day photo challenge beginning Feb. 14, 2018, coinciding with Lent. Focus on the beauty you see every day. Visit beautyinthecommon.com and thecommonyear.com to watch videos, listen to songs, read inspiring personal stories and participate yourself by sharing your story. #beautyinthecommon

Janae Jean serves as editor, social media manager and podcaster for Conscious Community Magazine. She has an M.M. in computer music composition from Johns Hopkins University and a BA in Music/Education from Judson University. Janae is actively researching using electronically generated sounds for healing. See janaejean.com and perennialmusicandarts.com for details about Janae’s upcoming classes, lesson information, workshops, shows and projects.

Previous What Are Conscious Relationships?
Next In Print – March 2018