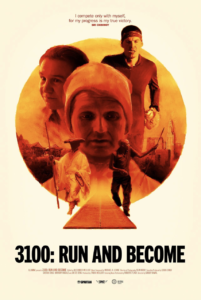 For this conversation, we had the pleasure to speak with film producer and director, Sanjay Rawal. Sanjay is the creator of the new documentary film, 3100: Run and Become (2018), as well as his previous works Food Chains (2014) and Challenging Impossibility (2011). 3100: Run and Become tells the story of the world’s longest distance race, held each year in Queens, NY, organized by followers of Guru Sri Chinmoy and lasting 3,100 miles. Participants run in search of spiritual growth, enlightenment, and to become better people. The film also explores the history of running as a spiritual practice, relating the stories of Navajo runners, the hunters of the Kalahari Desert and Buddhist monks in Japan.

The following is only a small part of our 40-minute conversation with Sanjay. To hear the rest of our conversation, download or stream the episode. Don’t forget to subscribe, like, review and share the Conscious Community Podcast on your preferred podcatcher app.

3100: Run and Become will have its Chicago premiere Sept. 21 – 27, 2018 at the Gene Siskel Film Center. Sanjay will appear Friday and Sunday to participate in a discussion with the audience. Visit www.siskelfilmcenter.org/3100run for ticket information and more.

SS: Running as a pastime in America only dates back to the ‘60s and ‘70s. I was curious if you know, did it originate in the spiritual community and then spread as far as being a popular thing?

JJ: You mean reemerge through the spiritual community as a popular activity?

SS: Yeah, because I was thinking of yoga and how that started as a spiritual practice and has become a fitness craze.

Sanjay: Well, to go way back we’ve only been agrarian as a species for the last 10,000 years. Which means that prior to 10,000 years ago we didn’t even domesticate animals. We evolved as animals through our feet. It’s one of the points our movie, 3100: Run and Become, makes as we follow these groups of men and women who are trying to run the world’s longest race, 3,100 miles. We explore the possibilities, the spiritual connections, through civilizations and cultures that still maintain a connection to these ancient practices of running. One the most profound examples are the Native Americans of the southwest, the Hopi, the Zuni, the Navajo. For them, they’ve always looked at running as a form of prayer. Your feet are on Mother Earth, you’re breathing in Father Sky. You’re running, you’re praying to become a better person. They feel running is a teacher, running is a celebration of life. So, one might say that running, along with dance and other forms of movement, is the oldest form of spiritual practice.

You brought up yoga. Hatha yoga, the idea of physical practice, is not that ancient. Some people say it’s less than 1,400 or 1,500 years old. At the same time, Hatha yoga was developed as a martial art. The yogis who brought it over into China taught it as the precursor to Tai Chi, which was initially a formal martial art. So, yoga was very much about moving the dynamic energies through the body. Not just for aggression or self-defense but for strengthening the physical body. You can say it’s evolved or progressed into something that’s much more leisurely, in terms of the way it’s practiced in the west. Although many people who have gone back to India to study from Hatha yoga teachers have understood that’s there’s a deep layer of energetic physical fitness.

SS: I used to dance four to six hours straight or do martial arts for six hours straight without a problem. When you do that as a routine it doesn’t even feel like a big deal but you tell someone what it’s like and they can’t believe it. A lot of people go to the gym and run on a treadmill or an elliptical for 30 minutes or an hour a few times a week and it’s a lot of work.

Sanjay: Back when we were hunters and gatherers, they might spend 30-35 hours per week in the practice of foraging or in the practice of hunting, and those 35 hours are pretty darn active. You’re talking five, six, seven hours per day. People would think nothing of that. In fact, if you did less than that you became dis-adapted to your environment. So, what we look at as intense physical activity is really looking at the basic state of our physiology as mammals.

SS: Modern life is particularly sedentary. If you look at the SAD (Standard American Diet), it diet gets a lot of flak for being unhealthy but going back just a couple generations ago when we were mostly subsistence farmers, eating a three or four-thousand calorie breakfast was absolutely necessary. You were going to be going from five in the morning until ten o’clock at night doing very strenuous activity. One of the problems with the current diet is we’ve shifted from eating like that and then being very active to eating like that and being very sedentary, and that causes all kinds of problems. I think, it’s probably healthier to increase our activity level to the point where we’re burning what we eat than it is to reduce our caloric intake.

Sanjay: I agree, in the film, we show runners circling these blocks for days and weeks and months on end and they’re taking 10-12,000 calories a day. At the same time, they can’t process that much in two or three meals, particularly because of the level of activity, so they’re almost grazing all day. When you look at most omnivores, they’re eating all day long, and they’re storing calories all day long because the reality of existence with that constant motion and work requires a big calorie expenditure. So, in this particular race, runners are doing one hundred plus laps a day, every lap they’re taking 100-200 calories. It works within their digestive system.

JJ: We were wondering, why is the race around one block? It could be from Seattle to Miami or something like that. Is it philosophical, like a mantra that you repeat over and over again, or is it just for logistical purposes?

Sanjay: I think it’s a little bit of both. There is the Transcontinental Run which goes usually from San Francisco to New York. But, if you can imagine, they’re going up the Sierra mountains, up the Wasatch mountains, up the Rockies. They might get hit with a headwind from Denver to Columbus, Ohio. At the same time, they’re running on roads so you have to be constantly aware of the traffic around you. Secondly, you don’t have access to aid, to restrooms, to calories, to liquid every half a mile like you do with the 3,100 Race in Queens. That said, when you strip away the logistics and you’re circling a block over and over you can enter a flow that allows you to basically transport yourself, transport your mind away from the physical environment. You can focus on trying to become a better person, focus on feeling joy and bliss and happiness. These things sound like dictionary words when it comes to running, most of us who run don’t necessarily run to experience a sheer sense of bliss. Running is hard, it’s painful. But, with these ultra-distances, each of the runners in this race experiences a kind of release after about three, four or five days—a release of the mental aspect of running, a release of the energies of the heart and experience a deep sense of joy. People come and do this race summer after summer after summer, and they’re very normal people. These aren’t people who are trying to prove anything to themselves or to the world. If they were they’d just do it once. When people come over and over and over to do this race, we see that they’re getting something very deep from within. It’s a sense of joy, a sense of spiritual progress, that they’re able to harness through these rightfully extreme distances.

3100: RUN AND BECOME. Trailer from Sanjay Rawal on Vimeo.