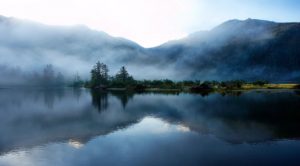 Whether we know it or not, the “ocean” of pure consciousness perfectly accepts the stream of our thoughts and impressions all the time. At every instant, we are in complete harmony with the Tao, but an apparent discord arises when, through a wrong use of memory and anticipation, we allow past and future experiences to conflict with the present. In the words of Emerson:

These roses under my window make no reference to former roses or to better ones; they are for what they are; they exist with God today. There is no time to them. There is simply the rose; it is perfect in every moment of its existence…. But, man postpones or remembers; he does not live in the present, but with reverted eye laments the past, or, heedless of the riches that surround him, stands on tiptoe to foresee the future. He cannot be happy and strong until he too lives with nature in the present, above time.[i]

But between the unconscious harmony of the rose and the conscious harmony of the perfect man lies the illusion of self-consciousness, separation, and discord, wherein we strive blindly for what in truth we have never lost. Yet this itself is no more an actual loss of the Tao than the disappearance of the rose in winter is a violation of its natural and proper life. The bloom is forgotten and the seed goes underground. “Unless a grain of corn falls into the earth and dies,” said Jesus, “it remains alone; but if it dies, it bears much fruit.” In spiritual development there must always be the middle stage wherein by apparent loss, by seeking and striving, we become conscious of the harmony that is our unconscious possession all along.

The ignoramus, the primitive “simple” man, accepts life for what it is, just as it comes. The “seeker,” however, looks for the God, the Reality, the absolute and eternal consciousness behind life, regarding the images of ordinary experience as a distracting illusion. But the perfect man, consciously one with the Tao, again accepts life for just what it is.

T’an asked a student, “What were you before you became a monk?”

“How do you look after the cattle?”

“I go out with them early in the morning and come home when it grows dark.”

“Splendid is your ignorance!”

Zen is spiritual freedom or spiritual poverty, that is, the liberation of our true nature (Buddha-nature or essence of Mind) from the burden of those fixed ideas and feelings about Reality which we accumulate through fear—the fear that life will run away from us. “Scholars,” said Lao-tzu, “gain every day; but Taoists lose every day.” Or in the words of Jesus, “Blessed are the poor in spirit, for theirs is the kingdom of heaven…. Blessed are the pure [i.e., naked and free] in heart, for they shall see God.” Such poverty and freedom are expressed in this poem from the Mumon-kan:[iii]

Hundreds of spring-flowers; the autumn moon;
A fresh summer breeze; winter snow:
Free your mind from idle thoughts,
And for you any season is a good season.

But again, we must “walk on” even from spiritual poverty if this be used as a means to graspthe truth of Zen. Chao-chu was asked, “What would you say to one who comes to you with nothing?” “Throw it away!”

These mondo may seem puzzling to the uninitiated, but in fact, there is nothing obscure or hidden about them. The truth which they indicate is, however, of such radical simplicity and self-evidence that our complex and burdened minds find it hard to see.

It is so clear that it takes long to see.
You must know that the fire which you are seeking
Is the fire in your own lantern,
And that your rice has been cooked from the very beginning.[iv]

Or, as Pai-chang said when asked how to find Reality, “It is very much like looking for an ox when you are riding on one.”

Kozankoku could not understand this, and vainly pressed the master for a further explanation. But later, when they were walking together in the mountains, they passed a bush of wild laurel.

“Do you smell it?” asked Kwaido.

“There, I have kept nothing back from you!”

It would be fatal, however, to interpret this in a sentimentally pantheistic sense, as if Kwaido were saying that the smell of the wild laurel is the Tao. No such conceptualism enters here. Pantheism, deism, theism, monism, dualism—all these are intellectual forms which must fail to grasp the living Reality. But when this has been thoroughly understood, intellectual forms may be used again without captivating the mind.

Strictly speaking, Zen does not have a method for awakening our minds to Reality, unless it may be called a “method of no-method.” A method, a technique for discovering Reality implies an attempt to grasp it, and this, according to Zen, is as misleading and unnecessary as “putting legs on a snake” or “adding frost over snow.” In the words of Lin-chi:

The true man who has an insight into Reality…gives himself up to all manners of situations in which he finds himself in obedience to his past karma. He appears in whatever garments are ready for him to put on. As it is desired of him either to move or to sit quietly, he moves or sits. He has not a thought of running after Buddhahood. He is free from such pinings. Why is it so with him? Says an ancient sage, “When the Buddha is sought after, he is the cause of transmigration.”[v]

Alan Watts (January 6, 1915 – November 16, 1973) was a British-born American philosopher, writer, speaker, and counterculture hero,best known as an interpreter of Asian philosophies for a Western audience. He wrote over 25 books and numerous articles applying the teachings of Eastern and Western religion and philosophy to our lives.

Excerpted from the book Zen. Copyright ©1948 by Alan Watts, ©2019 by Joan Watts and Anne Watts. Printed with permission from New World Library — www.newworldlibrary.com.

[iii]               The Mumon-kan(Chinese, Wu-men Kwan) or “No Gate Barrier” is a standard collection of mondowith brief comments and poems about each. In the verse quoted here “idle thoughts” are fixed concepts.

[v]                 Trans. D. T. Suzuki, Essays in Zen Buddhism, vol. iii, pp. 32–33. A free rendering of the original Chinese. Buddhahood is the state of enlightenment or awakening, or the immediate knowledge of Reality. Buddha is often used as a synonym for Reality.