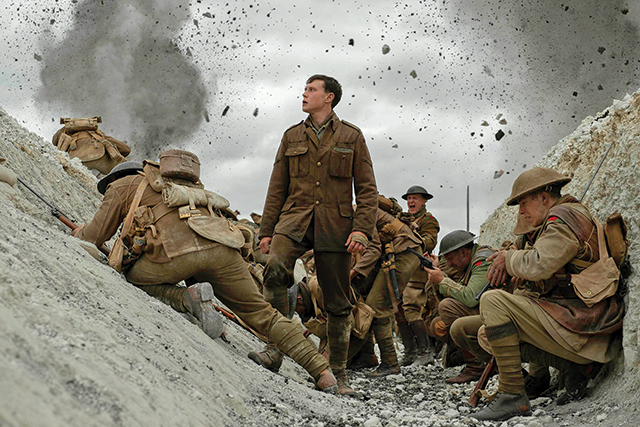 Written and Directed by Sam Mendes

“They have no idea what they are in for.” — General Erinmore (Colin Firth)

I do not like to go to war movies. My “wasband” took me kicking and screaming, saying that 1917 won the Golden Globe Award for Best Motion Picture and that I had to see it. In truth, “seeing” it is not really accurate. With this movie, you are literally “experiencing” it. The director, Sam Mendes uses a one-shot camera technique that puts you, as the audience member, as a participant in the journey. It is revolutionary in the way it was directed and shot. But in all honesty, if you asked me if I’d rather feel like I was alongside a soldier in World War I, or dancing the native Hawaiian Hula with the warm breezes and the tropical sunshine kissing my face, I’d most definitely choose the latter.

In this epic war movie, two young British soldiers (played by Hollywood unknown actors, George MacKay and Dean-Charles Chapman) set out to deliver a new order during WWI that could save thousands of lives, including the life of one of their brothers. The two young actors did a wonderful acting job, although the way the movie was scripted, I didn’t feel I knew them well enough to be fully vested in their well-being.

“I hoped today would be a good day. Hope is a dangerous thing.” — Colonel MacKenzie 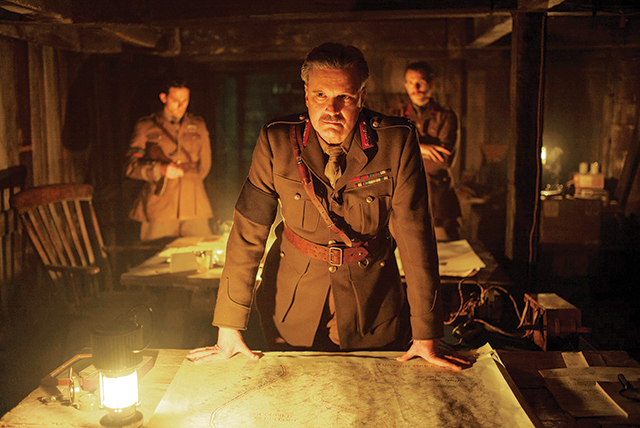 This one line from the movie, “Hope is a dangerous thing” has since been echoing throughout the recesses of my mind. I don’t want hope to be a dangerous thing. As I work with today’s teens, I’m seeing less and less hope in them and I find that is a dangerous thing. In the movie, the viewer is pulled into the drama. The way that Sam Mendes shot it, it is as if you are projected into it. Since this was the case, I never felt safe. I experienced an intense and constant adrenaline rush. While other movies have dramatized war with this one, I was there in the trenches or being fired at. As I sat there with the intense fear constantly coursing through my veins, I had a flash about our youth and how they feel like they are constantly being fired at in the myriad of battles that are projected on social media. They are on a heightened state of 24/7 alert and they don’t feel safe. I am not saying that social media is anything as intense as fighting in a world war, but I am suggesting that there is a constant state of alarm that they deal with on an ongoing basis.

Over the summer, we hosted several teens for a weekend in the Wisconsin Dells. As we sat by the fire, eating our s’mores, my “wasband” asked the group where they saw themselves in 50 years. Their responses shocked us. Three of them said that they didn’t think that they would be alive in 50 years. They expected the world to be annihilated by then. I was shocked by their lack of promise for their futures. When I was 18, I was dreaming of travel and career exploration, of having a wonderful husband and family. There were no thoughts of catastrophes or my life abruptly ending.

I ask myself how much of their hopelessness about the future comes from the media. I rarely watch television anymore because most of the shows are about evil, monsters, crime and the very worst of humankind. When I look at so many of the movies that are being shown, so many are about the end of the world or zombie wars. I just don’t see a lot of positivity being put out there by the media. Fear sells and our children are inundated with it.

The other day, I was with friends and we were watching a show about the political circus here in America. I stayed and watched for two hours, longer than I ever have. I finally got to the point where I had to excuse myself and leave. The divisiveness and basic disrespect were so overwhelming that I just couldn’t watch it anymore.

Do I think that the way to fight the political battle that is going on right now in America is to turn it off and walk away? Not at all. However, at the same time, I don’t believe that spending my days glued to media coverage while getting constantly bombarded with negativity helps either. I watched my energy drain as I got entrenched into the drama. I left the movie exhausted. By the time I left the TV show the other day, I felt even more wiped out. The negative adrenaline rush that surged through my body during that two-hour media coverage I watched was not worth the loss of my life force.

What I am most committed to is raising my consciousness and helping to raise the consciousness of others as much as I can at this time. As difficult as it is, after seeing my heart and body filled with white light, I see the loving light radiating into the hearts of those whom I see as divisive. I see loving-kindness filling their hearts and I imagine them becoming more conscious. Sending hatred towards those who are hating does not heal. Sending anger towards the angry, or closed-mindedness towards the closeminded only perpetuates the ugly, closed-hearted cycle. Will I take a stand? Will I go out and vote? Absolutely, but I refuse to spend each day of my precious, wonderful life getting angered again and again by the insanity that I see being played out in our politics.

I believe that war is crazy and futile. Perhaps I am a simpleton when I suggest that world leaders who want to put their countries through war each get a pair of boxing gloves, get a good trainer and then battle it out themselves. This would spare thousands of innocent lives that would forever be traumatized by what they experienced in warfare. Naïve, I know. There is so much more to warfare, especially the economics of it all. I’m hoping that we are reaching a tipping point in which higher consciousness will outshine the darkness. As shocked as I am about my neighbor displaying a flag that supports a politician that I do not respect, I am choosing not to hate my neighbor for their choice. I am choosing to allow them their opinion. I love them and I welcome them into my home. I see them as my equals, loving humans who are doing the best that they can with the life that they have at this time. These are all choices. Do we want to choose love, or do we want to be right?

Theresa Puskar is an author, performer, speaker and motivational audiobook producer. She edu-tains her audiences, by touching hearts and minds in a way that is engaging, joyful and life-affirming. Her most recent endeavors are her solo show, Causeless Joy, and her children’s entertainment program, Power Princesses and Super Heroes. She has just completed two books on mindfulness (available in hardcopy, ebooks or audio) published by G&D media, 8 Ways to De-Clutter Your Brain and The Good Morning Mind: Nine Essential Habits for the Workplace. They are both available for pre-order on Amazon.com and BarnesAndNoble.com. For more information, visit www.TheresaPuskar.com.