The Advent of Homo Luminous 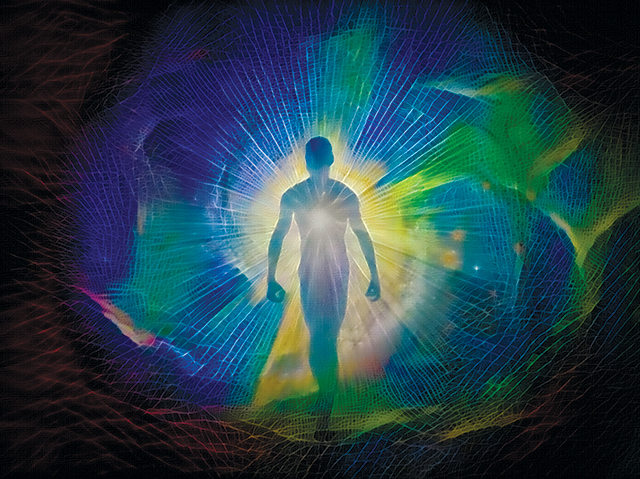 For millennia, secret societies of Native American medicine men and women carefully guarded their wisdom teachings. These shamans, also known as Earthkeepers, existed in many nations and were called by different names. In the Andes and the Amazon, they were known as the Laika.

In 1950, a group of Laika from the High Andes traveled to an annual gathering of shamans that occurred at the foot of one of the holy mountains. When the locals saw the ponchos the Laika were wearing they instantly recognized the markings of the high-shaman priests. They realized that this was a group of medicine men and women thought to have vanished after the time of the Conquest.

These high shamans, foreseeing that humankind was on the verge of a huge upheaval, had finally come out of seclusion to reveal the hidden wisdom that would sustain the world through the great changes and challenges it was about to face—teachings that would help us alter our reality and give birth to a better world.

These lessons were kept under wraps for a very good reason. With the arrival of the conquistadors in 16th century Peru, the Laika were relentlessly persecuted. Many were labeled as witches and sorcerers, imprisoned, tortured and killed. Their knowledge was considered so dangerous and threatening to the Catholic Church that even now, 200 years after the Spanish Inquisition shut down everywhere else in the world, the Laika maintains an office in Lima, Peru.

The secret knowledge that so worried the Church was that all of creation—the earth, humans, whales, rocks and even the stars—is made of vibration and light. Moreover, nothing that we perceive as material, and therefore real, actually exists. It is just a dream that we’re projecting onto the world, and we can easily change that dream and create a new world. This powerful wisdom was carefully guarded, but the Laika also recognized that it belonged to all humankind. When they met a foreigner who did not possess the arrogant, hostile mindset of the conquerors, they were willing to share their knowledge.

After the arrival of the Europeans, for instance, they took into their fold a Jesuit priest by the name of Padre Blas Valera, who was half Inka and half Spanish. Father Valera was initiated into the mysteries of the Laika and wrote four books about their teachings, three of which disappeared during the Inquisition. The fourth is held in a private collection in Italy.

Valera claimed that the Inka were as civilized as Europeans and were even able to write using a complex system of colored strings tied into knots, known as Quipus. When Valera’s order discovered what he was up to they incarcerated him. He died in custody six years later. Many questions remain: Why did the Jesuits silence one of their own? Why were they so afraid of the wisdom he was recording for the benefit of all? And, why did they forbid the ordination of any other mestizo or indigenous priests after Valera was defrocked?

I was another non-native taken into the fold of the Laika, initiated into the lineage of the Wisdomkeepers in the Amazon—yet it was never my intention to become part of this lineage. As a medical anthropologist, I was only interested in studying the healing practices of the shamans. As fortune or destiny would have it, a Laika named don Antonio took me under his wing and mentored me for nearly 25 years. He was a man of many lives—a university professor by day and a master medicine man by night.

Born in a high mountain village, don Antonio worked with the tools and practices of the 15th century, yet he was conversant in the ways of the 21st. Although he was descended from the Inka, he taught me that the Laika were much older than the Inka, whose culture was masculine and militaristic. The Laika’s teachings were from an earlier time when the feminine aspect of the divine was recognized. I once told him that I felt lucky to have found him, and he said, “What makes you think you found me if the Church could not find us for the last 500 years?”

Thanks to the discoveries of quantum physics, we’ve come to understand what the Laika knew all along—vibration and light can organize themselves into a thousand shapes and forms. First, there is a luminous matrix, and then this blueprint gives birth to life. Vibration and light swirl and condense around the luminous matrix and give birth to a whale, for instance, and then whales give birth to other whales.

The human body also has a luminous matrix: We’re enveloped by a luminous energy field (LEF) that manifests the form and health of the body. The LEF organizes the body the same way that energy fields of a magnet arrange iron filings on top of a piece of glass. And just like the whales, humans give birth to other humans. But the Laika—like the Inka, the Maya, the Hopi—also knew that at the culmination of a period of great turmoil and upheaval, a new species of human would give birth to itself from a new luminous matrix. We are about to take a quantum leap from Homo sapiens to Homo luminous, beings with the ability to perceive the vibration and light that make up the physical world at a much higher level.

For the first time, humanity will evolve not between generations but within a generation—which contradicts our beliefs about how evolution works. We’ll take a biological quantum leap within our own lifetimes and the physical, emotional and spiritual traits we acquire will be passed on to our children and our children’s children.

If this sounds hard to believe, consider that we create a new copy of our body about every eight months, as our cells replace themselves. We can manifest a physical body that is free of the tyranny of the genes we inherited from our parents and the medical maladies they bring us. But even more important, we can unchain ourselves from the limited emotional and spiritual stories we inherited or bought into during the course of our lives.

I know this because I have lived it, and I have witnessed others living it. This is also part of the wisdom the Laika kept secret for thousands of years until the time was right to share it with the world. They knew how to heal disease and create extraordinary states of health, as well as how to craft and shape their personal destinies by changing their LEF. They also understood how to access the biological blueprint of light and assist Spirit in the unfolding of creation.

Mastery of the insights revealed by the Laika not only allow us to free ourselves from the stories we inherited and from reliving their same physical ills and emotional ailments, it allows us to become Homo luminous. In doing so, we’ll give up the ways of the conquistador and discard the masculine theology that justifies the exploitation of the earth’s rivers, oceans and forests, because they’re seen merely as resources for human consumption. Instead, we’ll embrace an older mythology that has become lost to most humans, a feminine theology of cooperation and sustainability. We will become the ones we have been waiting for.

Alberto Villoldo, Ph.D. is a medical anthropologist who has studied the shamanic healing practices of the Amazon and Andes for over 25 years. He is the founder of the Four Winds Society, an organization dedicated to the bridging of ancient shamanic traditions with modern medicine and psychology. The Four Winds Society’s Light Body School is internationally recognized as the Gold Standard in shamanic education, preparing wise and ethical energy medicine practitioners. Villoldo is author of numerous books, including Shaman, Healer, Sage; The Heart of the Shaman; A Shaman’s Miraculous Tools for Healing; The Four Insights; Courageous Dreaming; and his latest release, Grow a New Body. Visit www.thefourwinds.com.