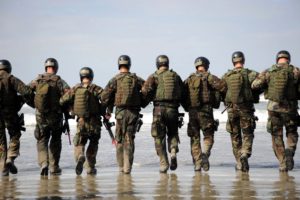 For our latest podcast interview, we had the pleasure to speak with Mikal Vega who is the founder of the Vital Warrior. Mikal is also a former Navy SEAL, an actor, a director, a producer and a musician. He currently serves as the military advisor on NBC’s The Brave and is recording an album of mantra music. During this conversation, Mikal touched on the causes and long-term effects of trauma, reclaiming our creative power, coming from a place of service and the importance of being true to yourself.

Vital Warrior aims to treat PTSD, fight stress and accelerate healing without pharmaceuticals for military veterans, first responders and their families. Their mission is to “restore military and civilian veterans to their inherent state of health and vitality by providing access to a unique fusion of therapies that focus on the mental, emotional and physical spectrum of stress and trauma recovery.”

You may reach Mikal via Instagram and Twitter @MikalVega and on Facebook @MikalAVega. You can connect with Vital Warrior at VitalWarrior.org and on Facebook @VitalWarrior.Org or by phone at 310-529-9175. They encourage you to connect with them to learn about free Kundalini Yoga (in-person and online) and other healing modalities available to you if you are a veteran, first responder or family member.

The following article is only a brief part of our in-depth conversation. To hear the full interview, scroll to the bottom of the page, or subscribe to the Conscious Community Podcast on iTunes, GooglePlay, Stitcher, TuneIn and YouTube.

Spencer: To start off, would you like to tell us about your background? Are you a military veteran yourself?

Mikal: I am. I didn’t start out on a typical path for the military. I wasn’t a giant jock in high school. I was a glee club type guy with a hot pink vest and top hat. I got bullied a lot, but I was just like pure creativity. That’s all I wanted to do throughout junior high and high school.  I sang, I danced, and I performed at a national level with the school. I did what I knew from my father; he was in the military and I wanted to be like him. So that’s what I did. I joined the military when I was 17 and stayed for almost 22 years.

I spent the first nine years of that in the Explosive Ordnance Disposal (E.O.D.) community and became a senior E.O.D. technician, that’s the Bomb Squad. From there, I went into the SEAL team. I did multiple tours to Iraq. It was great; the experience was great. I wouldn’t change it for anything and because of those experiences, I wound up back in that creative space. Due to combat-related injuries, I was medically discharged in 2012 from a roadside bomb in Iraq. The irony is not lost on me; the bomb squad guy got hit by a bomb. But, I’m fortunate, it was all these internal things that I was initially over-medicated for. The bigger danger was that they were just trying to figure out what this whole PTSD thing was. It was a lot of experimentation…and it led to me almost being killed by over-medication. So, after the medications almost did me in, I revolted against that system, and I started to do things that helped me feel better that I remembered using for performance reasons—one of which was myofascial release or Rolfing. It’s tissue work that’s kind of like torture, but they don’t ask you any questions.

S.S.: Deeply penetrative work… We actually interviewed a gentleman [Everett Ogawa] who learned from Ida Rolf who does a variation, Integral Bodywork.

M.V.: It was highly effective. I kind of like the intensity of it. So, I started doing that and from that, I found acupuncture; from that, I started learning about the meridians and chakras; and then I found out about yoga and this Kundalini energy and the meditations I could do. Ever since I found Kundalini Yoga and a lot of things came through that have always been there. It’s something that we all have; this awareness and this ability to integrate life’s experience.

Janae: I wanted to ask you about what they are doing now in the military to deal with PTSD. I know they with a resilience program with Dr. Martin Seligman, the founder of the Positive Psychology movement. They were testing it in the Army to avoid drug use, they were using gratitude. Are you familiar with that?

M.V.: There’s a video on YouTube called Let There Be Light (1946.) It’s a video from World War II and how they discovered in the military then that the pills don’t work. That psychiatry isn’t effective. These guys who were completely frozen up, and they use creativity to heal themselves.

J.J.: So, they were using music and art?

M.V.: All that stuff. So, absolutely, we are doing that.

S.S.: There’s an interesting story I heard in another interview with you. Is Mikal the name you were born with?

M.V.: No. I was born as David Fritsch. I did a legal name change, and it’s a spiritual name for me. So, when you go through SEAL training, you have a swim buddy that goes with you. My first name, Mikal, is a contraction of my swim buddy’s name, Michael Koch, who was the first person to ever put their dreams secondary to mine to be able to help me. He was killed in Iraq doing what he loved to do. That was to protect people. He was one of the most talented people I had ever met. My last name Vega… Vega was the North Star. The star that guided the Three Wise Men to Christ, and it will become the North Star again once declination shifts. Aurora is my middle name and that means “light.” It’s inside the two names signifying inner light. This name change came from this practice and this ability to meditate. It came through loud and clear that I was supposed to do this. I didn’t even understand it really at the beginning. It was really awkward for me. It was just a change. Like any spiritual name, it was the milestone of changing purpose in life. Now that purpose is to use my creative talents to uplift and inspire others to discover theirs and do the same thing for others. That’s it; nothing more, nothing less!

Previous Let There Be Light – Interview with Dr. Jacob Liberman
Next Yoga – Getting Comfortable with Being Uncomfortable