The 5th Generation Internet (5G) – Welcome to the Internet of Things: Crossover of Humans and Machines 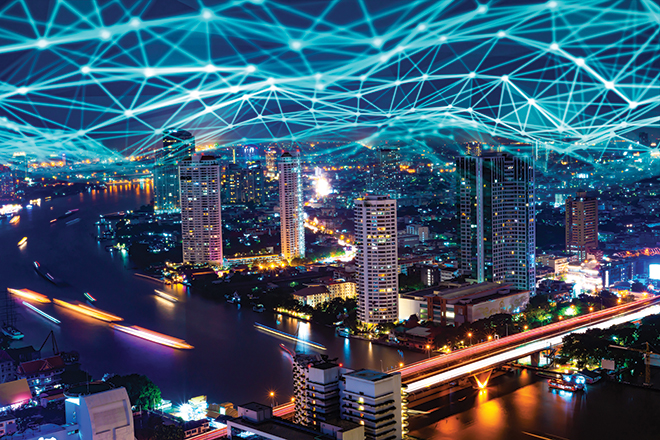 The technological progress is rapidly leading us into the Fourth Industrial Revolution, with the Internet of Things (IoT) being the tech giant’s new catchphrase. What exactly is the Internet of Things? With the advancement of technology, we are becoming more and more connected. The internet and smartphones have given us the connection to the rest of the world that we were always longing for. We started out with the dial-up internet, which took quite some time to connect. Today, we can tell our “personal assistant,” Alexa, that paper towels are to be at our doorstep in an hour. IoT will be connecting all of our devices to the internet, anything from the coffeemaker, washing machine, smartphone, to autonomous vehicles, and even humans.

The former Federal Communications Commission (FCC) Chairman, Tom Wheeler, briefly explained in 2016, “5G will connect the Internet of Everything. If something can be connected, it will be connected in a 5G world. But with predictions of hundreds of billions of microchip-enabled products from pill bottles to plant waterers, you can be sure of only one thing: the biggest IoT has yet to be imagined.”

The convenience and expectation that technology created sets us into panic as anxiety overwhelms us when a page takes longer than five seconds to load. 5G internet will satisfy the increasing hunger for speed along with connecting everything to the grid. Both technological innovation and progress are seen as achieving higher speed without taking into consideration the long-term effects. Tom Wheeler further states, “Unlike some countries, we do not believe we should spend the next couple of years studying what 5G should be, how it should operate, and how to allocate spectrum, based on those assumptions.”

5G roll-out includes antennas which “aim and amplify signal,” incorporates smart technology such as smart meters, smart houses and appliances. The current and new frequency bands are listed below:

To put this in perspective, FCC guidelines propose Maximum Permissible Exposure (MPE) which applies to frequency bands over 6GHz. “The Limits for General Population/Uncontrolled Exposure” table found in FCC guidelines from 1997, includes a frequency range of 0.3-100,000 MHz. The guidelines consider radio frequency (RF) exposure for 30 minutes only and only one device at a time. FCC further states “the most restrictive limits on whole-body exposure are in the frequency range of 30-300 MHz where the human body absorbs RF energy most efficiently when the whole body is exposed.” 5G will generate much higher frequencies. We are already exposed to RF 24 hours per day, and if everything is to be connected in the era of the Internet of Things, then the electro-smog will pollute our environment even further with unimaginable consequences to humans and the whole environment.

The antennas that are being built will be placed on every street lamp, on buildings, stores, billboards, etc. and due to very high-frequency bands, the antennas will have to be in very close distance to one another. Additionally, thousands of satellites, that may have even higher frequency bands, will be launched into space that will be required for the 5G rollout to be successful.

The race to 5G has already begun. The top industrial nations have entered the competition of who will have 5G first. According to CTIA.org the United States has to do everything to win, “Because when we win the race to 5G, we all win.” What seems to be the rush? Why not understand what we are dealing with first? Tom Wheeler certainly does not want to focus on any type of research into 5G. The supporters of 5G from the CTIA claim “5G will be even more transformative—making our lives better, our communities safer, and our nation more prosperous.”

Certainly, we will have very different, transformed lives with everything being connected to the grid, but will that really make our lives better with internet doing everything for us? We will find ourselves living in smart cities but becoming dumber. “Smart cities, dumb people.” Is that a hidden slogan of 5G? But our nations will be more prosperous, well, maybe certain people. It’s all about the financial gains that are involved.

What about safety? We all want to live in a safer world, especially when there is so much chaos going on, that a potential of putting a stop to it gives us a perspective of peace shining on the world. Can 5G provide that? China is one of the participants in the 5G rollout. One of the possibilities that being on the grid provides us with is cybersecurity. China has created a super surveillance system including facial recognition and the ability to find a suspect within minutes. This surveillance also includes a rating system; if you are a well-behaved citizen, you can participate in society. If your rating goes down, you are not able to fly or buy a house. This sounds like something taken out of George Orwell’s book, 1984.

A small detail that needs to be considered, is that as technology advances, hackers are not sleeping either. There is a huge threat that once everything is connected to the grid, it will provide a very easy opportunity for a city or a nation to be hacked. Perhaps FCC and the regulatory bodies, as well as their equivalents of the 5G race participants, should take that into consideration.

The growing concern of the scientific and medical communities allows the public to have greater access to science that provides evidence that electromagnetic radiation is not as safe as the industry claims. One such resource is the Bioinitiative Report 2012, which lists frequencies and their health effects backed by published research. The frequencies listed in the report include the 3G and 4G and based on those we should seriously start questioning 5G and the disastrous health consequences.

Over 230 scientists from over 40 countries expressed their serious concern for the 5G roll-out by forming the 5G Appeal, “Numerous recent scientific publications have shown that EMF affects living organisms at levels well below most international and national guidelines.” The listed health effects include “cancer risk, cellular stress, increase in harmful free radicals, genetic damages, structural and functional changes of the reproductive system, learning and memory deficits, neurological disorders, and negative impacts on general well-being in humans. Damage goes well beyond the human race, as there is growing evidence of harmful effects to both plants and animals.” This appeal was filed in 2015.

The 5G Appeal refers to the Nuremberg Code of 1949, which was formed as a consequence of WWII where informed consent is required for experiments that are to be performed on human subjects. The concerned scientists state: “The Nuremberg code (1949) applies to all experiments on humans, thus including the roll-out of 5G with new, higher RF-EMF exposure. All such experiments: ‘should be based on previous knowledge (e.g. an expectation derived from animal experiments) that justifies the experiment. No experiment should be conducted, where there is an a priori reason to believe that death or disabling injury will occur; except, perhaps, in those experiments where the experimental physicians also serve as subjects.’ (Nuremberg code pts 3-5). Already published scientific studies show that there is ‘a priori reason to believe’ in real health hazards.”

Additional examples of the hazards of the alarmed scientists include: lowered sperm count in all species and bee colony collapses. A huge threat that we are facing if we continue on this path is species extinction. Science in Society found a study in Greece reporting that “mice exposed to mobile phone microwaves at 1.68 m W/m 2 became completely sterile after five generations, while those exposed to 10.53 mW/m 2 became completely sterile after three generations.”

What can we do in this helpless situation that we are finding ourselves in? Unfortunately, we are all aware that industry has tremendous power over our governmental agency and sadly, a lot of universities, which are often performing studies that show results favorable to the industry.

The power that we have is to stay informed and share knowledge and independent research. Don’t rely on someone to tell you, go to the articles referenced below and do your own research. Research what Dr. Magda Havas, Dr. Dietrich Klinghardt, Dr. Olle Johansson, Dr. Graham Downing and Devra Davis have to say about the increasing exposure to electromagnetic radiation. There is a lot of very valuable information and videos at Electromagnetic Radiation Safety, www.saferemr.com.

Write to your local and state officials to look into this subject. Town hall meetings are a great option to get your voice heard. Most likely, many representatives and your local community members are not even aware this is a problem, however, some are aware and we need to ensure that we as people are aware of this issue and we want to our future generations live and thrive in a safe world. Let’s encourage our regulatory agencies to do their jobs and regulate the industry instead of the industry regulating the agencies, which were put in place to protect the good of the people. Spread this knowledge forward and stay safe. Let’s take actions to save this planet and the residents that inhabit it.

Ania Wilewska is a Rasha practitioner. Rasha is an Advanced Scalar Plasma Crystalline Technology. With an in-depth evaluation and consultation, she can create a holistic integrative approach to an issue with which you are currently dealing. Ania herself suffered for years from multiple autoimmune diseases and healed herself through a lifestyle change, herbs, supplements and Rasha. Currently, Ania is a Ph.D. candidate at Quantum University where she is able to integrate her knowledge of herbal and ancient medicine, medical anthropology, with quantum medicine. For more information, visit www.therasha.com, email Ania to schedule a consultation at Wilewska@protonmail.com or call 630-362-7209.

Drowning in a Sea of Microwave. Science in Society 2007. http://www.i-sis.org.uk/DSOM.php

What is the Internet of Things? WIRED explains. Wired February 2018. https://www.wired.co.uk/article/internet-of-things-what-is-explained-iot

Wireless pollution ‘out of control’ as corporate race for 5G gears up. The Ecologist 2016.
https://theecologist.org/2016/oct/27/wireless-pollution-out-control-corporate-race-5g-gears

Ania Wilewska is a Rasha practitioner. Rasha is an Advanced Scalar Plasma Crystalline Technology. With an in-depth evaluation and consultation, she can create a holistic integrative approach to an issue with which you are currently dealing. Ania herself suffered for years from multiple autoimmune diseases and healed herself through a lifestyle change, herbs, supplements and Rasha. Currently, Ania is a Ph.D. candidateat Quantum University where she is able to integrate her knowledge of herbal and ancient medicine, medical anthropology, with quantum medicine. For more information email Ania to schedule a consultation at Wilewska@protonmail.com or call 630-362-7209.