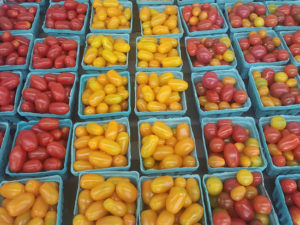 Are you on the vine about tomatoes, or can you eat them one after the other like potato chips? I’m a bit dicey. Not a zestful tomato connoisseur. I’ve pretty much always liked the dishes made with tomatoes, like pizza and pasta with sauce, but eating plain tomato’s or popping raw tomatoes in my mouth? Not so much.

It turns out that that’s okay, and in some respects, it may be healthier to eat tomatoes cooked instead of raw. Sure, eating uncooked fruits and vegetables might be the best way to preserve many nutrients, but various studies have shown that heating tomatoes can increase the antioxidant lycopene by as much as 164%. More about lycopene in a bit.

Americans consume almost 17 pounds of fresh tomatoes per person every year making it a $1.4 billion industry. Did you know that tomatoes were legally defined as a vegetable by the American Supreme Court back in February 1887?  At the time of the court case, fruits and vegetables differed in that vegetables were slapped with a 10-percent tariff upon their arrival in the United States and imported fruits were not. The Supreme Court ruled that people neither prepare nor eat tomatoes like fruits and that they should be taxed accordingly. Did you know the tomato was so controversial?

In the Midwest, tomatoes are in season from July to October.  One of the world’s most popular vegetables, the tomato is botanically a fruit. True fruits are developed in the base of a flower and contain the seeds of the plant. Fruits and vegetables differ in one major way. A fruit is technically the seed-bearing structure of a plant, while a vegetable can be virtually any part of the plant we eat.

There are 10,000 varieties of tomatoes worldwide. They can be yellow, red, pink, black, purple and even white. Did you know that the more naturally colorful your food is, the more likely it is to have an abundance of cancer-fighting nutrients? Pigments that give fruits and vegetables their bright colors represent a variety of protective compounds.

Tomatoes are the major dietary source of the antioxidant lycopene, which has been linked to many health benefits, including reducing the risk of heart disease, lowering of blood pressure, reducing inflammation and protecting from multiple forms of cancer. They are also a great source of fiber, vitamin C, potassium, folate and vitamin K.

Whether you like to eat your tomatoes hot or cold, if you want to live better and longer, you just need to eat them! How’s that for motivation to give these recipes a try? 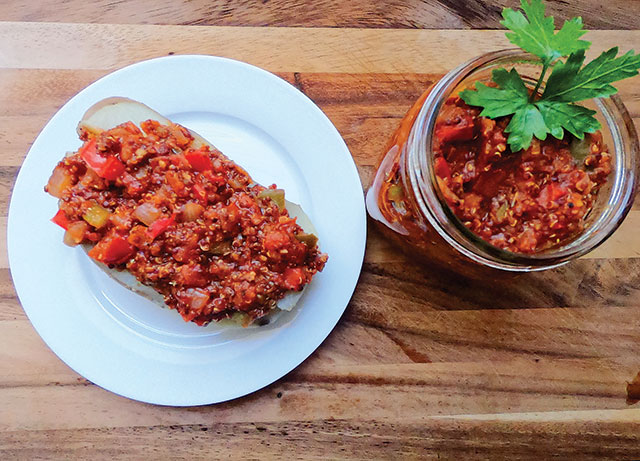 Red Lentil Tomato Sauce This sauce is chunky, hearty and packed with lots of antioxidants, fiber and protein. You can substitute the red lentils with quinoa. If you substitute, cooking times may need to be adjusted.

Whip up a more nourishing meal by serving it over a baked potato or spiralized veggies. This sauce also makes a great vegan pizza. Just spread on your favorite pizza dough or bread, sprinkle with nutritional yeast, add more veggies if you like and bake.

Directions
In a large pot over medium heat, add the onions, peppers and cook, stirring occasionally, add water as needed, until soft, about 5 minutes. Add the garlic, Italian seasoning and pepper. Cook, stirring, for one more minute.

Add the tomatoes, marinara, vegetable broth and lentils. Stir to incorporate. Heat until the mixture comes to a boil, then reduce the heat to medium-low. Simmer sauce for about 25 minutes or until the lentils are tender.

Stir in parsley. Taste and add additional pepper, or salt, if desired.

Keeps refrigerated in an airtight container for three to four days or freeze for up to three months. 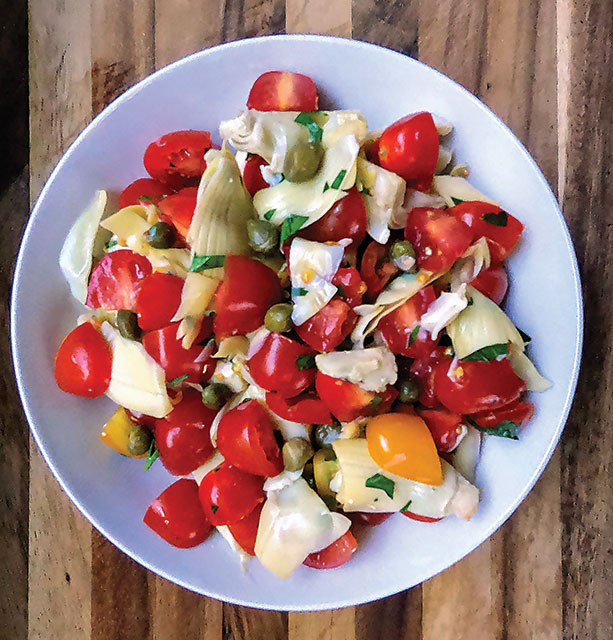 Artichoke and Tomato Salad This is such a simple, yet flavorful recipe. I love eating it as is, but it’s also great tossed with pasta or stuffed into wraps.
In addition to the health benefits the tomatoes provide, artichokes and parsley are digestive aids and used to soothe the stomach in many cultures.

Directions
Toss everything together. How easy is that?