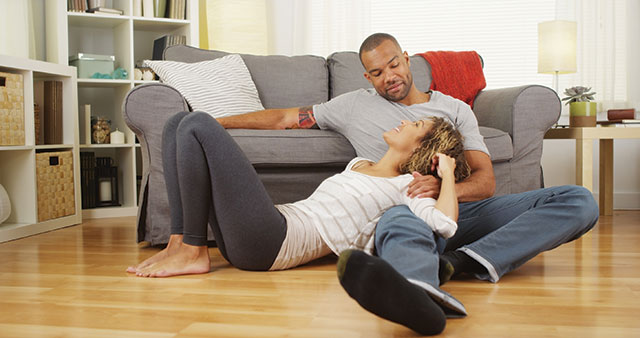 Couples fight. Sometimes a little, sometimes a lot. Sometimes these fights provide comic relief. At other times they threaten the very survival of the relationship.

Ironically, the hardest person to use active listening with is your partner, particularly if they are upset with you. Someone you love can stimulate your feelings faster than anyone else. Soon you may be unable to keep the focus on the other person’s feelings.

There’s a paradox here. When people are in a fight, it would be helpful if they had their feelings acknowledged, which active listening can do. On the other hand, active listening may seem artificial, not the real you.

It may be time for the Five-Minute Rule.

There will be times when active listening isn’t possible for you: you may have so many feelings that you simply can’t create space inside for the other person’s feelings. This is particularly true if their feelings are about you. It is the rare person who can use active listening when they are the target of another person’s anger or frustration.

Years ago a marriage counselor taught my wife and me a simple technique that may have saved our marriage. It’s called the Five-Minute Rule. Each person gets five minutes to say whatever they want, any way they want. The other person does not interrupt at all (or display any emphatic body language). Then they switch. The person who has been silent gets five minutes to say whatever they want, and the other person remains silent. If, at the end of both turns, people still have feelings they need to express, they do another round of five minutes each.

There are ground rules. Both people agree that either one can invoke the Five-Minute Rule at any time (with some possible exceptions, such as not in front of the children or other people). Once the Five-Minute Rule has been invoked, both people stop whatever they are doing. The only discussion that is allowed is who is going to speak first. Sometimes it is obvious that one of you has a more urgent need to express feelings. But if it’s not obvious, flip a coin.

The reason the Five-Minute Rule works is that for five minutes nobody is telling you that you are bad, stupid, or crazy for feeling the way you do. In ordinary tit-for-tat arguments, you are being told you are wrong every twenty seconds or so. Five minutes is long enough that some of the heat of the argument dissipates. I find, for example, that after about four minutes I am repeating myself to the point where I’m beginning to bore even myself. I still feel the way I did, but a whole lot of the intensity has gone out of my feelings. I don’t have the feeling that I just have to get the other person to understand and respond.

When using the Five-Minute Rule, do not interrupt your partner, no matter how he or she is expressing feelings. If each of you can avoid blaming and accusing during your five minutes of speaking, it will make it easier to feel good about each other when the exchange is over. If you interrupt your partner to point out that he or she is doing a poor job of sending “I” messages, you will so antagonize them that you’ll lose all the benefits of the Five-Minute Rule, or you’ll trigger a whole different argument.

James L. Creighton, Ph.D., is the author of Loving through Your Differences and several other books. He has worked with couples and conducted communications training for nearly 50 years around the world. Visit him online at www.jameslcreighton.com.

Excerpted from the book Loving through Your Differences.

Previous Frequencies Push Us Over the Edge
Next Full Moon – November 12, 2019 – Feasible and Fabulous