Matcha for Mind, Body and Spirit 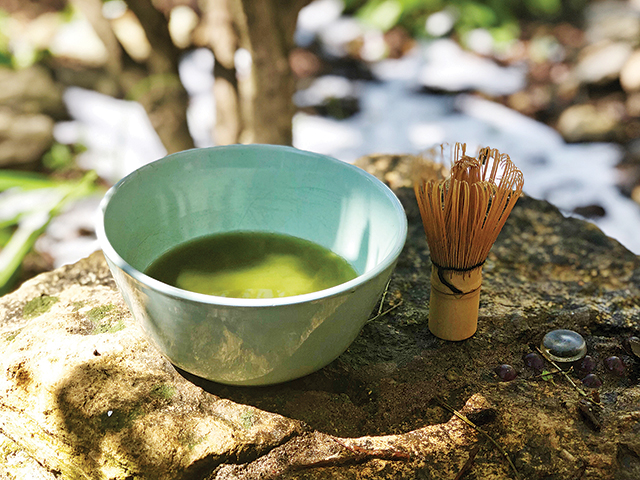 Matcha, or literally “powdered tea,” has become a trendy ingredient for lattés, baked goods and even savory meals. It is a variety of green tea that has a long history and is important to the ceremonial life of Zen practitioners. This emerald-colored tea comes in a variety of grades for ceremonial and culinary purposes. Matcha offers the drinker a variety of benefits for physical, emotional and spiritual health.

Matcha is a unique part of the Japanese cultural arts, though its roots go back to the Chinese Tang Dynasty (618-907), where pulverized tea was made into bricks for storage. During the Song Dynasty (960-1279) in China, in China drinking powdered tea became popular and elaborately glazed tea bowls became popular as well. These bowls, narrow at the bottom with a wide top were shaped to accommodate the bamboo tea whisks.

There is a strong relationship between the careful cultivation of the tencha (tea leaves) that becomes matcha and the way matcha is served. While matcha is available and enjoyed in various forms in the West and in Japan, its ceremonial presentation is a type of meditation that is designed to bring people together, as well as teaching being present. There are three main schools of the tea ceremony which all share a common ancestry, however, there are other variations as well.

Sen no Rikyu is considered the father of the Japanese “Way of Tea.” He lived in what is now known as the Osaka Prefecture of Japan during the 1500s. It was from his teachings about tea that have led to the important aspects of the tea ceremony; those aspects are simplicity, directness and honesty.

The tea ceremony first appeared in Japan in a time of war. For this reason, the cups selected do not match, and symbolize that though we are different we are one. The same idea applies to the mix of flowers that are chosen to decorate the ceremonial space. This type of aesthetic is known as “wabi-sabi,” which is centered around the acceptance of imperfection and seeing its beauty. In this way, drinking matcha is not only an experience for the taste buds or a social gathering, but it is a type of communal meditation for the host and the guests. 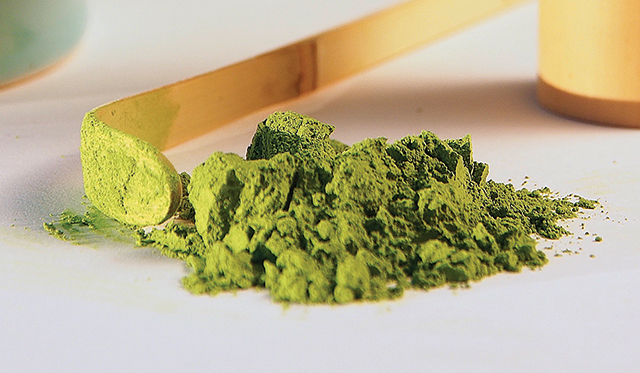 Since the tea leaves used to make matcha are from such high-quality plants, it’s the most potent way to get the health benefits from drinking green tea. Along with vitamin C, vitamin A and potassium, matcha is a rich source of the antioxidants called “polyphenols” which have been linked to heart disease prevention, cancer prevention, blood sugar regulation, reduced blood pressure and free radical neutralization, which prevents the effects of aging. One polyphenol called EGCG has been shown to boost metabolism, and slow and even stop the growth of cancer cells.

Like all true teas, matcha contains caffeine. In fact, a cup of matcha contains three times as much caffeine as a cup of steeped tea, and about the same amount as a cup of brewed coffee. However, the way the caffeine in matcha impacts our brains and bodies in a different manner than it does in other caffeinated beverages is due to the natural occurring amino acid in matcha, L-theanine, which induces relaxation and actually increases the quality of sleep. Matcha gives us a boost like coffee but without the coffee jitters.

Since matcha is a powdered form of tea, you are drinking the actual tea leaves when you drink it. This makes it different than other forms of tea which are steeped. For this reason, it is important to do some research about your tea and its quality before drinking it. Most experts recommend looking for Japanese-grown matcha. To fully enjoy a bowl of matcha, choose a ceremonial grade, which will provide you with the highest nutritional value and best taste.

Drinking matcha regularly provides you with many nutritional benefits. It has been proven to improve mental function and calm our nerves. When you sip your bowl of matcha, be mindful and enjoy.

Janae Jean is a professional music instructor, composer, sound healer and writer. She has a BA in Music/Education from Judson University and a MM in Computer Music/Composition from the Peabody Institute of the Johns Hopkins University. She is passionate about tea and creating our own daily rituals. Visit www.JanaeJean.com and www.PerennialMusicAndArts.com for more about her current projects.