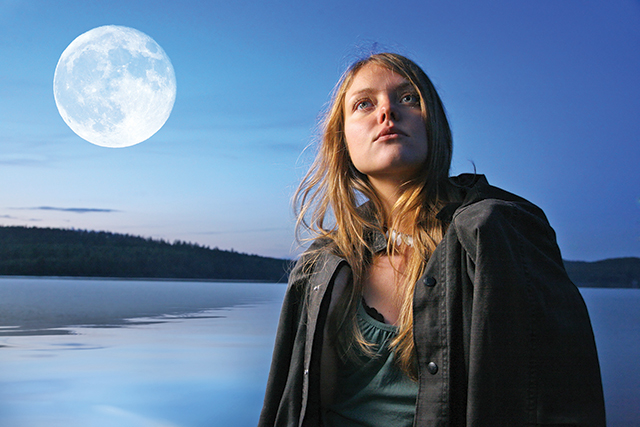 Did you know that a woman is 16 times stronger, more intuitive and more powerful than a man? Did you know that a woman has 11 moon centers located in different areas of her body? That she moves to a different moon center every two and a half days? And, that she sees the world during those two and a half days through the quality of her moon center? It’s all true! Woman’s basic nature is like the Moon which waxes and wanes, while man’s basic nature is like the Sun which is continuous and constant.

Often a female is labeled as emotional or unpredictable, always changing her mind, delivering the unexpected from day-to-day. The reality is that women have 11 moon centers that move to different areas within the body every two and a half days. These moon centers relate to different qualities and are used to process one’s environment and emotions.
The female fluctuates every two and a half days like the waxing and waning of the Moon. In the 28 days of the menstruation cycle, a woman’s moon can be found in one of the 11 different areas of the body. They are called the 11 limbs of the woman.

How does the Divine Feminine use the knowledge of knowing what moon center she’s in? Well, the two and a half days when the moon is in the lips is a great day to give a public talk, teach a class or counsel a client. On these days, the female is super communicative and interactive.

Knowing one’s moon center pattern can provide a great deal of insight into a female’s emotional ebb and flow. Once she understands her personal cycle, she’ll have a compass to align with her day-to-day feelings, responses and interactions.

A woman’s moon center sequence is unique. It will not necessarily follow the order listed above. It will not follow her siblings or her female friends’ cycles. The way the moon moves varies in each and every woman. It often takes a few months to accurately map one’s moon center sequence. Before going to sleep at night, spend 7 to 11 minutes to ask yourself, “What moon center was I in today?” Some women use a pendulum to help determine which moon center they are in. Others have their partner help them by using muscle testing. Or, partners help by simply providing plain old verbal feedback!

After a few months, a woman’s pattern should become clearer. If the moon center pattern is still not clear, there are meditations to help increase one’s sensitivity and balance the moon centers.

One of these meditations is called Kirtan Kriya. Kirtan Kriya can break any habits, complete any unfinished cycles and assist in moving through any transition or change and its accompanying emotional turmoil. Normally, Kirtan Kriya is practiced sitting in Easy or Lotus Pose. However, this version of chanting Kirtan Kriya is done lying on the stomach with the chin on the floor to balance the 11 Moon Centers.

How to practice: Lie on your stomach. Place your chin on the floor. Keep your head straight without looking left or right. Place your arms alongside your body, the palms of the hands facing upward. The eyelids are closed. Focus at the mid-point between the brows. Silently chant the mantra, Saa Taa Naa Maa. You are chanting the cycle of creation. From the infinite, Saa, comes life and individual existence, Taa. From life comes death or change, Naa. From death comes the rebirth of consciousness to the joy of the infinite through which compassion leads back to life, Maa.

Practice Kirtan Kriya every day for 40 days to change a habit, 90 days to confirm the habit, or 120 days so that the new habit becomes who you are. Kirtan Kriya is a healing meditation for women trying to let go of past relationships. It helps in eliminating both the physical and mental associations with these partners. Kirtan Kriya gives the Divine Feminine a brilliant internal radiance that illuminates both her presence and her aura.

However, this ‘16 times’ business is a double-edged sword—as the plus, so the minus. Yes, she is 16 times stronger and more powerful than a man. However, when she is feeling depressed or insecure she is 16 times more depressed and more insecure than any male. The female is, quite simply, 16 times harder on herself!

The Soul is Without Gender

It is said that the human incarnation is envied even by the angels, because of the unique opportunity humans have to make a conscious choice to be free from the cycle of birth and death. Whether embodied as the Divine Feminine or the Divine Masculine, let’s use this incarnation to utilize the Lunar nature of the female to better understand one another.