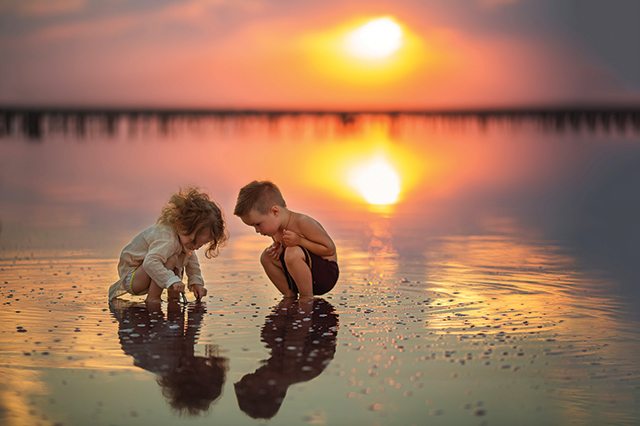 In attempting to delineate some of the causes that impede spiritual progress, we tend to blame two of our prominent created human attributes, our body and our mind. To some degree, this makes sense, since the human body can certainly be a source of distraction, embarrassment and pain; while the mind is often so out of our control that it is like a runaway train. The more we learn to transcend these strictly human functions, the more we come to understand that the true culprit in these matters is not our body; nor is it the mind per se. Rather, it is the conditioned mind.

When we are born into this world, our minds and bodies are neither good nor bad, beneficent nor troublesome, helpful nor hindering. They just are. They are what they were created to be. They are fully primed at that point to perform their functions, according to their created mandate. But then a couple of things happen in our experience—and at present, there are very few born into this world who do not share this experience—that throws everything out-of-whack. One thing that happens is that we lose touch with our spiritual consciousness for a time, and the second thing, which is very much related to the first, is that our minds become inundated by and imprinted with the cultural reality view of our world.

Neither of these infantile experiences is the product of our own choice; nor are they the result of some wrong we have done. Rather, they simply happen as a result of the reality of life on this earthly plane. Therefore, they are neither condemnatory nor deserved. They just are.

Mental conditioning is a relatively easy concept to grasp. In recent centuries, this concept has not only become widely recognized and acknowledged; it has even been codified into a science—the science we now call psychology. Thus we can readily understand how our infantile inundation overpowers us and sears our minds with a reality imprint that is very difficult to change and reprogram. A newborn infant is in no way capable of choosing, reasoning, filtering out, exercising spiritual discernment, etc. He or she is quite helpless and thoroughly vulnerable. So it is that this imprint upon our minds takes place fluidly and without any countering influence whatsoever. We can also understand why such an imprint would prove to be so tenacious when we later attempt to reprogram it. Psychological research into the workings of the human mind has discovered a vast complexity to its functions, including a subconscious aspect that can lie so deeply buried within us that we not only lose touch with it; we lose all capability of changing it.

Of course, were it not for the elements of infantile conditioning assailing us, this constraint upon our spiritual consciousness would not be terribly problematic. If human children were allowed to grow up free and shielded from the effects of cultural inundation, they would remain perfectly innocent. Then when the time came, during which they were biologically capable of receiving spiritual consciousness’ input, they would fluidly embark upon the journey of spiritual maturation and fruition—a journey that would be traversed with very little difficulty or opposition. Moreover, our world would then be reflective of an entirely different energy than it is now. The human race would have spiritual values and priorities. Attaining spiritual enlightenment would be almost automatic. It would be the birthright of every human being and would be attained effortlessly and, in some cases, instantly.

And so we come to understand that it is not the body or the mind that makes spiritual fruition so elusive. It is the conditioning of the mind—the cultural inundation that assails us when we are in our most vulnerable, impressionable state and causes us to be imprinted with a realistic view not our own in the deepest recesses of our subconscious.

Be all this as it may, our situation would again not be so troublesome if the reality view imposed upon us was somewhat expressive of spiritual values. If such were the case, we might still have work to do to achieve spiritual fruition, but it would in all likelihood be a good deal easier for us than it is now. Thus we deduce that it is not just the fact that our minds are conditioned at birth that proves problematic; it is the utterly unspiritual quality of that conditioning. In other words, it is the substance of our cultural reality view that derails us spiritually. This aspect of substance is what overpowers us and causes our inner world to essentially become a house divided. Furthermore, it is the substantial quality of our conditioning that is responsible for most of our glaring societal plagues, such as poverty, war, disease and death.

Poignantly, ever since human beings began the practice of infantile psychological conditioning, life in our world has become like a revolving door. We each enter this world only to be overwhelmed and overpowered by its cultural inundation. Then once we have become thoroughly imprinted by and sold to this reality view, we become willing participants in the conditioning of our children. And so a circular outworking of futility is perpetuated. In the East, this circle of futility is sometimes referred to as the cycle of birth and death. Why is this? Because under the constraints of our conditioned mind a death experience is unavoidable and inevitable.

Thus we learn that one of the foremost characteristics of our conditioning is its unquestioned loyalty to temporality. As long as the clock is always ticking, our reality view will include death as an inevitability. It is this obsession with time and death that has caused the conditioned mind to be constantly operating in a fearful mode. The idea of death’s inevitability is such a cruel taskmaster over our psyche that we naturally come to fear not only death itself but also everything that reminds us of death. This is why we fear disease and financial insolvency. They forcefully remind us of our mortality.

And so it is fear that has become the dominant substantial quality of our conditioning, and it is this substance that we pass onto our children. To inculcate our present cultural reality view as parents is to overwhelm the pristine minds of our young ones with the terrible foreign darkness of fear. But there is more.

Fear is not just a powerful emotion. Rather when it comprises the substance of our conditioning it becomes a perpetual mindset, through which we filter all our perceptions. As such, it not only distorts our perceptions; it creates our life’s circumstances.

Fear causes misperception, and together, these tend to create truly hellish conditions. In truth, human beings would never have known poverty, disease or death, were it not for our misperceiving, fear-obsessed conditioned mindset.

It is a misperception caused by fear that has been the impetus behind the establishing of our present Darwinian economic system—a system in which every man and woman on this planet feels that they must make their own way and sometimes strive, scheme and fight to earn their daily bread. This terrible perversion of our inbred biological survival instinct may lead to a few strong ones among us becoming wealthy and powerful, but for most of us, it has the opposite result. For most of us, it evokes a palpable and persistent sense of lack and limitation—the misperception that there is simply not enough to go around.

It is also a misperception of fear that causes disease and death. These plagues have come about on account of a general misperception about the makeup of the human body. Fear has caused us to perceive the human body as being materialistic and dense, somewhat like a solid rock, only one with internal processes. This misperception has actually lent a sense of bulk and heaviness about our bodies, which when combined with the scientific law of gravity that roots all matter to the earth’s surface (and keeps it from floating out into space) weighs upon us and causes us to relate to our bodies as physical or materialistic entities—entities that naturally decay and decompose. Then as we age, having come to believe in the inescapability of decay, we manifest this belief through various internal dysfunctions and external changes. Thus it is the belief that our bodies must, over time, decay and decompose that actually causes them to do so.

In truth, our bodies are not physical; they are spiritual. They are reflections of light that portray the image of our individual spiritual identity and essence. It is a scientific property of matter to decay and change form, but an image of light is not subject to this same property. Therefore, there is no reason that it cannot endure forever. Physical bodies malfunction, breed disease, grow old and die. But bodies of light are not only immune from this familiar progression; they actually need very little in the way of maintenance and attention.

What then can we do to counteract this and other deleterious misperceptions of the conditioned mind? The key to our liberation is in the development of our spiritual consciousness awareness.

The conditioned mind thrives on two factors unconsciousness and false identification. When we are unconscious and unaware of what our mind is doing we tend to automatically identify with it. In other words, in relation to our conditioned mind, we come to believe that we are it. Then this strong identifying belief leads to an acceptance of our conditioned mind’s activity and substance regardless of its harmful quality.

Logically then, the liberating solution to this predicament lies in conscious awareness and rightful identification. By becoming aware of our conditioned mind’s activity and substance, we come to recognize that it is dominantly fearful and dark and we begin to question its inviolability. We are appalled to realize that we have been accepting this disturbing mindset and relating to it as self-defining. This then leads to the discovery and nurturing of an identity that is based on spiritual truth—a new sense of Self, which, as it expands and grows, undermines the influence that the conditioned mind has wielded over us since the day we were born.

The most efficacious method for developing this self-awareness and facilitating the shift in our identification is meditation—the practice whereby we learn to quiet our minds enough to be able to witness our thoughts. Meditation also works to strengthen and nurture our new emerging sense of spiritual Self-hood.

The conditioned mind is a force with which all of us on the spiritual path must reckon. Though it can appear at times to be too great an obstacle for us to tackle, it is, in truth, only a phantom force—one that quickly loses its largesse as we begin to see it for what it really is. Thoughts and beliefs, no matter how daunting they appear, are never set in stone. They can be changed and overcome. When we can do this, our minds will no longer enslave us but will instead become servants of the highest order.

Jakeb Brock is the author of the recently published book, The New Consciousness: What Our World Needs Most. For more about Jakeb and his book, visit www.ournewconsciousness.com.