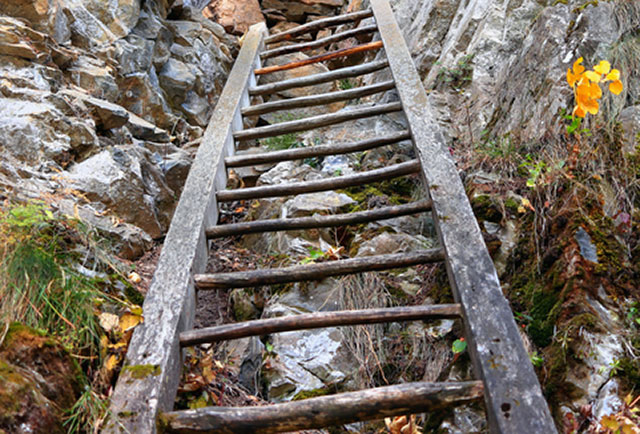 Somewhere far away on a huge mountain between the trees stood a ladder. The ladder was really tall, but the wood was rotten and moldy. The ladder’s paint was faded and grey. The ladder had been there for such a long time, and nobody knew what it had been used for. Surrounding the ladder stood large, strong, vibrant trees that looked very majestic. Compared to those trees, this ladder looked really ugly and not attractive at all.

One day, some lumberjacks went alongside the mountain and noticed the ladder. They were really surprised to find a ladder in such a place. When they came closer to the ladder, they could see old dirt and rust on it, and they all agreed that this ladder did not have any purpose in this spectacular forest between the magnificent trees. All of them decided that the best thing they could do would be to chop down the ladder. They chopped the ladder down into pieces that they did not have any use for at all.

Later that day, the lumberjacks went home. When night came, they noticed that it was very dark, and there were no stars or moon in the sky. The next night, they went outside their homes and noticed that it was so dark they knew that something was wrong. At that moment, they all had the thought that perhaps they should go back to the place where they chopped down the ladder. When they got there, they noticed a small man who stood in front of the chopped ladder. When they asked him what he was doing there he said that someone had chopped down his ladder, so he could not light up all the stars.

This story illustrates how small things, random people, events, and thoughts are important, and how everything matters and creates our reality.

This summer, I hope that each of you is able to take some time for yourself and celebrate all of the small things and the big things about you, and appreciate the people and things around you as well. You matter and everything around you does as well.

At this moment, I want to encourage all of you to support our advertisers and be an active part of this community. Your support and impact are both appreciated and important!

Enjoy our July issue and have a great summer!