From the Heart – To Boldly Go 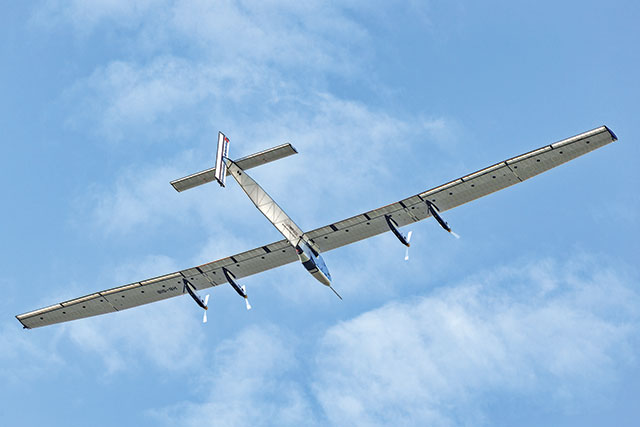 On March 9, 2015, pilot Andre Borschberg lifted his experimental aircraft Solar Impulse 2 from the Abu Dhabi runway. His bold plan: to fly a fully solar-powered airplane around the entire globe without using a drop of fossil fuel.

In the stirring documentary, The Impossible Flight, we ride the roller coaster of challenges and triumphs that characterized Solar Impulse 2’s epic journey. While the inventors planned to make the trip in 12 legs at an airspeed of 45 miles per hour, the fragile craft was continually thwarted by rough weather and equipment malfunctions.

The toughest moment came when the lightweight vessel was set to fly its longest leg over the Pacific Ocean from Japan to Hawaii—a grueling five-day trek through adverse weather systems. The pilot had to sit in a fixed position for almost the entire trip, except for occasional 20-minute power naps. As the flight neared the midway point of no return, the team’s on-ground meteorologists and engineers sadly concluded that the weather ahead was too dangerous and feverishly urged the pilot to turn back. But the pilot refused. “I have a very good feeling we can do it,” he replied and pressed on. After two more harrowing days threading the needle between storms, Borschberg landed safely in Honolulu. SI2 later went on to return to its starting point, 504 days after its departure.

Two different people live in your mind: One is an engineer calculating odds and risks according to known science. The other is the voice of passion, intention and spirit, prone to take leaps of faith beyond known science. Both are important. Science helps us understand and maneuver the world we know. Our sense of vision and adventure propels us to go beyond the world we know into more exciting dimensions. The engineer measures probabilities. The spirit is motivated by possibilities. We must honor the engineers who designed that brilliant aircraft that could break records; but if it were up to the engineers alone, the airplane would have turned back and the records would not have been broken. Something within the pilot said, “I can and I will,” which ultimately achieved the goal.

The journey to success is like a train ride powered by a steam engine. The tracks guide the train to its chosen destination. The steam propels the train forward. The tracks represent the earthy calculations to stay goal-focused. The steam is the passion to reach the goal. If you have tracks but no steam, the train will not get anywhere. If you have steam but no tracks, the train will bounce around helter-skelter and crash or do damage. To reach your goal, you need steam and tracks.

Hunter S. Thompson said (in other words), “the purpose of life is not to arrive safely at death….” Some people spend their lives playing it safe, never launching out into new, exciting and possibly dangerous territory. In the process, they squash and lose their passion; each year they become a little less alive. Benjamin Franklin said, “Many people die at age 25, and are not buried until they are 75.” Franklin was one of a small group of people who founded a nation on the radical idea that citizens could make choices for themselves rather than letting a monarch control their lives. While we now take democracy for granted, at that time every country was ruled by a king, emperor or czar. It took a huge leap of faith to establish the first modern democracy. The Founding Fathers considered their project a great experiment. They had the courage to boldly go.

Thomas Jefferson penned the first draft of the Declaration of Independence when he was just 33 years of age. He could have said, “I’m too young, too inexperienced. This project is bigger than me.” But the vision of a free nation was greater than his personal doubts. He pushed on and initiated one of the most important documents in human history.

When the Wright Brothers flew the first airplane at Kitty Hawk in 1903, the distance of that flight was shorter than the wingspan of a modern 747 jumbo jet. If you had told anyone that year that a man would walk on the moon only 66 years later, less than one lifetime, you would have been called crazy. But passion moves people to do things that reason would never approve.

At this moment you have a vision to do something you have never done before. You have a book, song, relationship, seminar or business calling to you from your womb of creativity. A voice within you shouts, “You can and must do this!” While another voice chides, “Turn back before it’s too late.” When making your choice, you stand at the same midway point where the pilot of Solar Impulse 2 found himself in that historic journey. That project encountered tremendous adversity, but its innovators persevered until the dream became a reality.

So, will you persevere until you fulfill your destiny? Someday, sometime, you will look back on your adventure and recognize it was spirit-guided. At that point, the engineer and the visionary within you will give each other an exuberant high-five and congratulate each other, “Well done!”

Alan Cohen is the bestselling author of A Course in Miracles Made Easy. Join Alan and musician Karen Drucker in Hawaii, Dec. 1 to 6, 2019 for an extraordinary retreat, “A Course in Miracles: The Easy Path.” For more information about this program, Alan’s Holistic Life Coach Training beginning Jan. 1, 2020, his books and videos, free daily inspirational quotes, online courses, and weekly radio show, visit www.alancohen.com.